HIV infection in Botswana, one of the hardest hit countries in the world, is largely concentrated in the urban and peri-urban areas of the country with the highest disease burdens in Greater Gaborone and Greater Francistown. The burden in absolute numbers is highest among older populations (age 25+), and strikingly so among women. The most recent UNAIDS Spectrum (2019) estimates suggest a lower burden of HIV compared to the previous year, although modifications to the model may account for the apparent differences. The PLHIV estimate is now 360,183 (HIV prevalence of 15%) and the incidence rate is estimated at 0.31 (6,405 new infections).
Humana People to People Botswana HIV work origins date to 2001. HOPE started in 2005. The HIV/TB 90-90-90 program work started in the year 2015, with a new priority on the prevention of new infections by HIV testing and treatment of HIV as soon as a person test positive, with the purpose of achieving a low viral load and being much less infectious. First, the project was small and implemented in Southeast, Goodhope, and Southern sub-districts. Year by year the project has grown big, reaching large areas of now Kweneng East, Selibe Phikwe, Palapye, Bobirwa, Greater Gaborone, and Greater Francistown district. In 2023, HPP will continue to use the TCE approach for the delivery of services to affected populations in nine designated target areas of implementation The project will be implemented from January 2023 – December 2023.
The Total Control of the Epidemic (TCE) model has reached 700 thousand people in Botswana, attained HIV yield rates of 12%, and helped people make lifestyle changes and adopt preventive behaviors all across the continuum of prevention and treatment. As the epidemic has developed, Total Control of the Epidemic (TCE) was adapted to help the country reach its 95-95-95 targets. 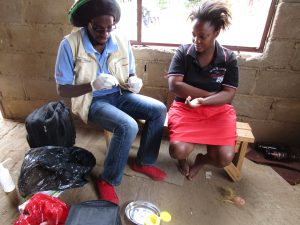